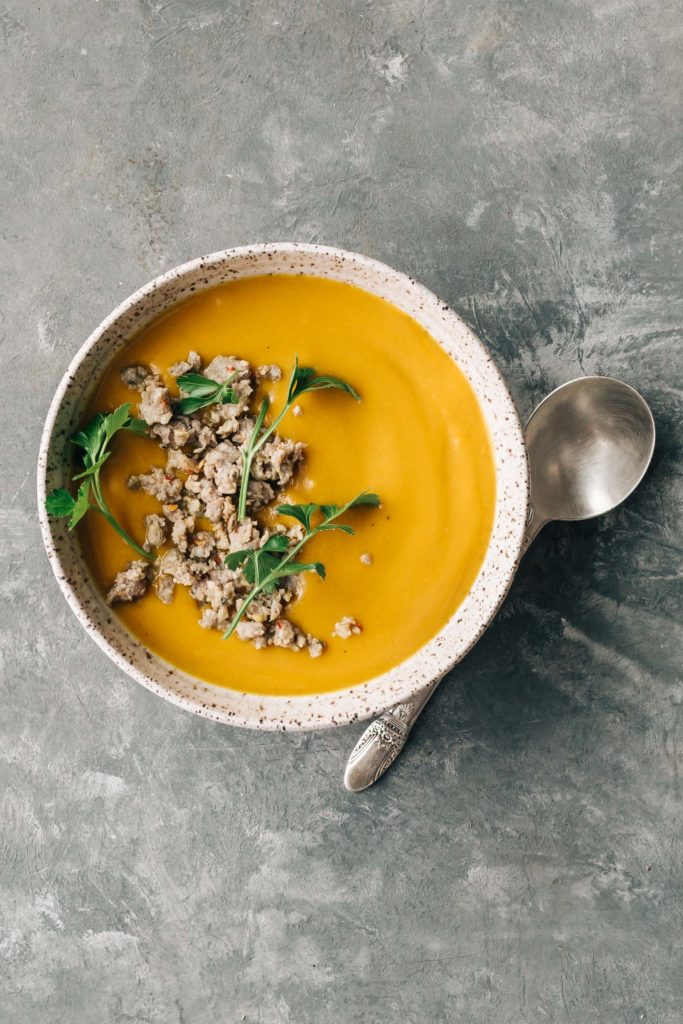 Whelp folks, we’ve finally “sprung” forward and the days are officially getting longer.  I love this time of the year on the farm because we can literally watch the farm slowly wake up from her long winter’s nap. The snow has finally melted, the sun has been shining and our first round of greenhouse crops is germinating well and the garlic that’s out in the field (we plant garlic in the late fall) is growing like a champ! And while spring is lingering right around the corner, it’s still officially winter and we’re still “officially” eating winter crops.

This soup is absolutely wonderful. It’s spicy, sweet and topped with some crispy chorizo (we had our butcher make some chorizo sausage from our pigs and it’s so dang good!) If you’re a vegetarian just skip that part and then the soup will actually be vegan. However, if you’re a meat eater I would highly suggest going the extra step here. The crispy sausage adds a lot of flavor and texture and we can’t get enough! This is a great soup to whip up on a chilly March evening and I hope you all enjoy it as much as we do.

Grab a poon and dig in!

*Whenever I recipe calls for not using a whole can of coconut milk I always suggest blending the whole can in a blender before measuring out. Reserve the rest of the coconut milk for your morning coffee, smoothies, or baked goods. *This recipe is slightly adapted from Half Baked Harvest