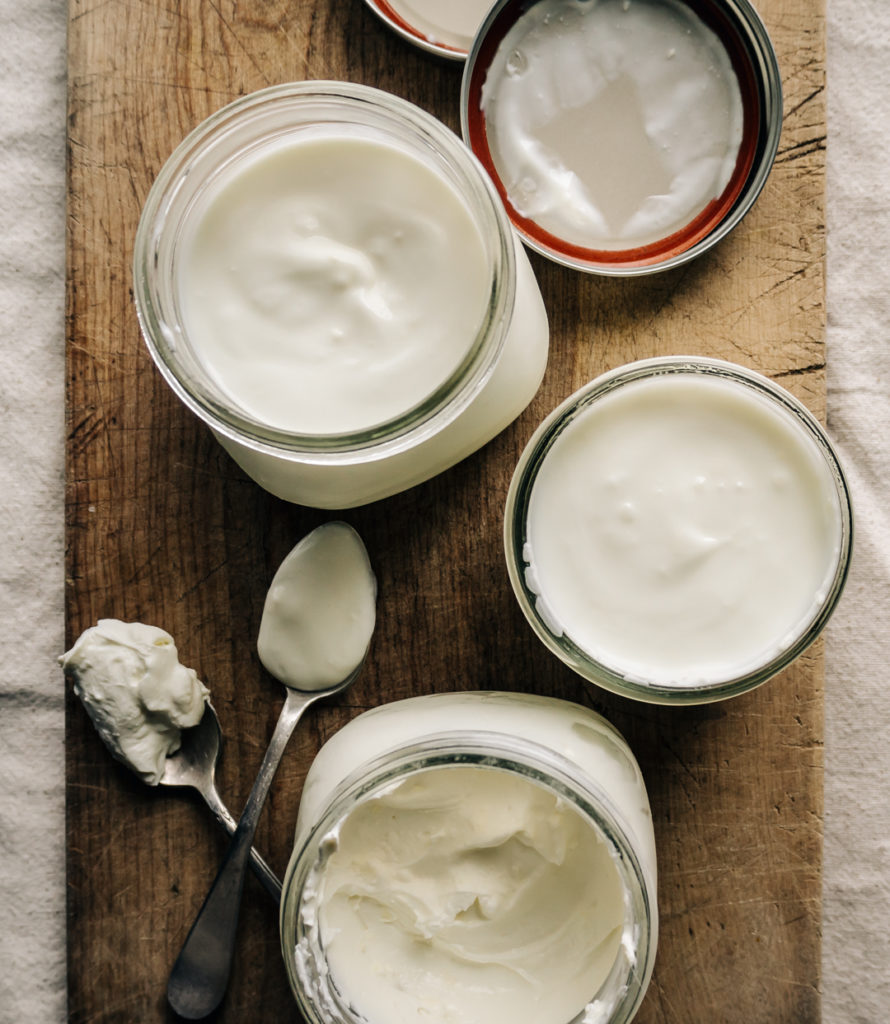 If you’ve been following me on instagram over the past few months then you already know that I’ve been trying my best to reduce our daily waste. Over the past year I’ve kept looking in our trash and recycling bins and wondered where in the hell all this stuff that is overflowing the bins is coming from. I’ve always considered us “mindful” consumers, but hot damn, we are a major part of the problem with our use of unnecessary packaged items. And while I know it’s pretty much impossible to avoid all packaging, I’m working on the areas where I can avoid it. In this case homemade yogurt has been a fun swap from the plastic tubs that I purchase at the store weekly. And before I scare you off and you think homemade yogurt seems too time consuming and fussy, I’ll preface this by saying it’s only a total of 15 minutes of hands on time (even though the yogurt has to “incubate” for 8 hours) most of the magic happens while you’re at work. Second, this recipe is for folks with an instant pot only (every model except the LUX)  If you don’t have one you can google recipes with an oven method like this one from the New York Times.Not only is homemade yogurt less wasteful with zero packaging, but it’s creamier, more delicious and way CHEAPER!!!! So while you eat your morning cup of granola and yogurt you can pat yourself on the back that you’re saving a few bucks with each batch of yogurt you make. I’ll raise a cup of coffee to that! Here’s a few notes before we get started:

First: A rule of thumb is to use 1 tablespoon of yogurt starter for every 1/4 gallon of milk. My recipe calls for a 1/2 gallon of milk so you’ll need 2 tablespoons of starter. Feel free to scale up and use an entire gallon of milk, though for your first batch I’d suggest a 1/2 gallon just to be safe. A yogurt starter can be from any jar of store bought yogurt that says “active cultures” on the carton. Make sure your yogurt is plain (no sweeteners) and full fat for the best results (though I’ve heard low fat and even Greek yogurt will work fine as a starter as long as it has active cultures). Once you get going with making your own yogurt you can start saving a portion of each batch to use as your starter for your next round. Just freeze a few tablespoons in an ice cube tray after each fresh batch is made. Make sure you defrost your “starter” before you use it for the next batch.

Second: Make sure you sanitize your instant pot insert. Pour boiling water in there with some vinegar and give it a solid rinse a few times. You don’t want your yogurt to have a trace essence of meat, curry, or spicy chili. Trust me!

Third: The only other “equipment” you’ll need is a meat or candy thermometer.

Fourth: Don’t stress!! This is an easy method even though there’s quite a few steps involved. If I can do this, trust me, you can too! Now that homemade yogurt is in our lives, I almost can’t remember what life was like before this silky, smooth delicious treat! Also- if you want to sweeten your yogurt wait until it’s already done and then you can stir in sugar, honey, vanilla or lemon. Just taste test as you add your sweeteners.

*Store the yogurt in the refrigerator for up to 2 weeks